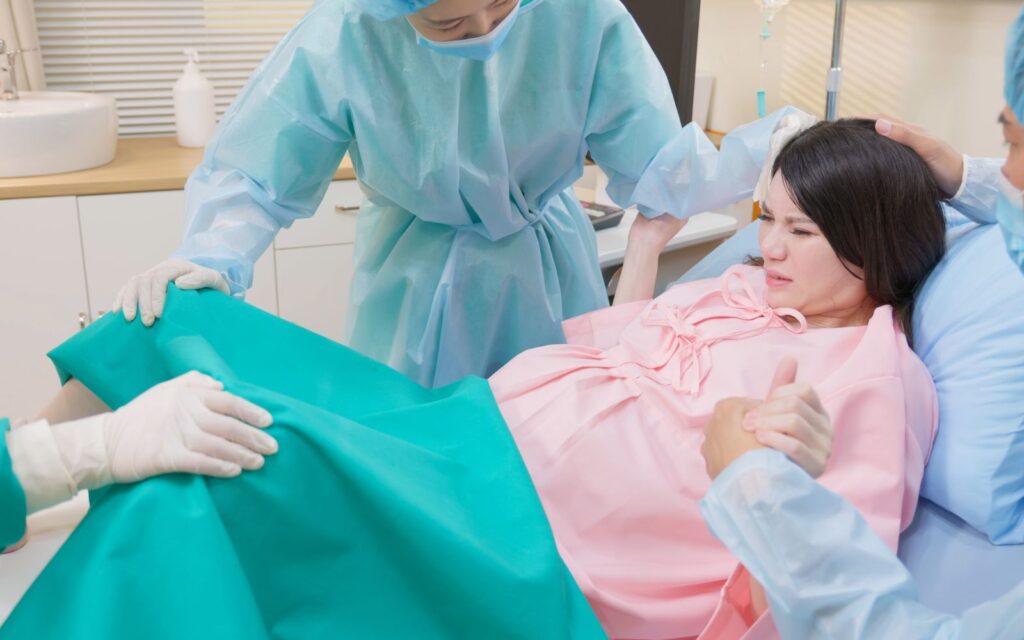 Grace had her first child when she was 25, her goal was to go to a hospital without medication with as little intervention as possible. At 41w3d, Grace started giving birth on her own (24 hours before her scheduled induction). She came to the hospital with contractions every 2 minutes, 2 minutes long and very intense. When she had her cervical check on arrival, she was only 1 cm dilated. Thus began her long and hard labor of 16 hours. The contractions never broke up and her body slowly widened. After 14 hours of labor, Grace felt the urge to push, and after two hours of pushing, it was discovered that the baby was OP and that there was a cervical lip that the baby’s head could not get over. The midwife performed an episiotomy and the baby boy was born in the next push!

Grace’s second pregnancy was almost identical to the first, with no complications. She went into labor with the same intentions as the first, without medication with as little intervention as possible. At her 41 week appointment, Grace showed up at her midwife’s office and was 7cm dilated and told to go straight to the hospital! After the midwife manually ruptured her waters, the baby arrived 4 hours later in what Grace would describe as a “pain-free delivery”! Night and day difference with her first birth and thus healed from the trauma of her first.

Grace lives in Omaha, Nebraska with her husband, Brent, and two children: Ryker 3 years and Maelyn 10 months. She works in the tech industry and also runs a wedding photography business! She enjoys cooking, spending time with friends and photography. You can contact Grace by email at: aapril994@gmail.com or on Instagram:

This episode is sponsored by 8 Sheep Organic Products . Did you know that more than 78% of pregnant mothers have trouble sleeping at night? If you’re lying awake in the middle of the night, tossing and turning, unable to sleep, then you should check out 8 Sheep’s “Sleepy Lotion.” It is a body lotion specially formulated to help pregnant mothers sleep better. It also helps with common pregnancy pains such as restless legs, leg cramps and back/hip pain.

Over 116,000 moms have used this lotion and rated it 4.8 stars! It also comes with a 60-day money-back guarantee! If you are not 100% satisfied, you can return the jar for a full refund! Go to 8Sheep.com and use the code BIRTHHOUR for 10% off your purchase!